I discovered NCover over the weekend and wow, am I a fan!

NCover is a code coverage tool which, to quote the website, “helps you test intelligently by revealing which tests haven’t been written yet.” In laymans terms, NCover graphically shows you which lines of code were not touched during the execution of your unit tests, allowing you to create tests accordingly to achieve 100% code coverage, as shown below:

1. Develop units tests to test your pipeline and ensure that the tests execute and are successful;

2. Invoke your testing framework from the command line to check that your tests will run correctly in the NCover environment (I’m using NUnit here, but you could also invoke VSTS):

Which should produce the following output on the command line:

3. With our unit tests successfully executing, we can wrap the NUnit invocation in NCover loveliness which will inspect our code coverage while those tests executed: 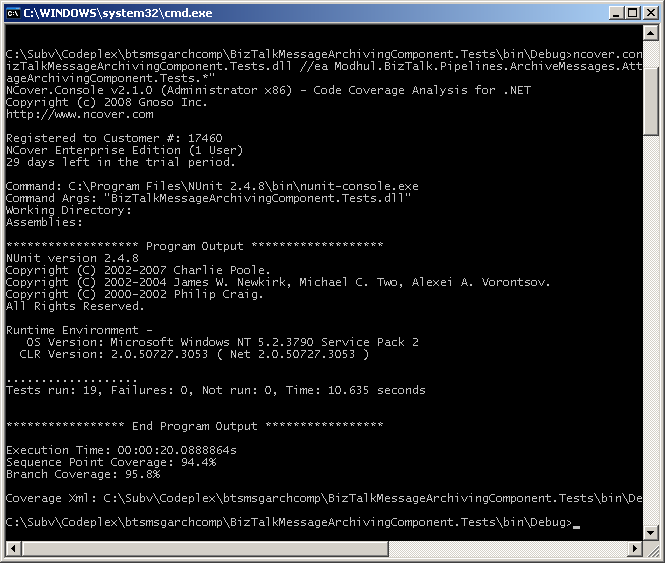 4. Load the NCover.Explorer tool and open the Coverage.Xml file generated above, you will be presented with a screen detailing your code coverage. In the example below, you can see that the PerformImmediateCopy and StreamOnReadEvent methods do not have full code coverage – both have code which was not executed in our unit tests:

Clicking on one of the methods in the tree view loads the offending method, displaying the lines which were not executed by our tests in red; lines that were executed are displayed in blue: 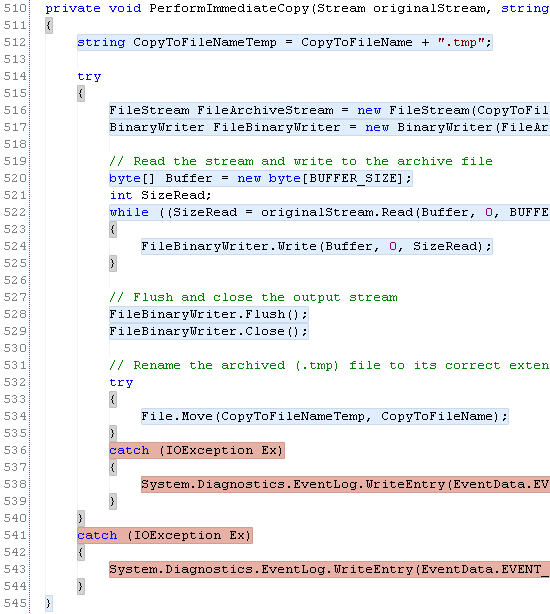 Based on this information, we can now create tests to cater for these exceptions, ensuring we have 100% code coverage.

NCover is an excellent tool and although it isn’t free, I personally think its a must-have for any developers tool-kit.

I’ve spent some time recently working almost exclusively with BizTalk pipeline components and took the opportunity to use the excellent Pipeline Testing Library produced by Tomas Restrepo (more info is available here and here). If Microsoft were writing this post, they would probably say that ‘It Rocks!’. I’m British, so I’ll be a little more reserved and simply say that, imho, this is the single best tool for developing and testing custom pipeline components, period.

The library provides a framework for unit-testing components in the standard NUnit or MSTest manner, without having to go to Pipeline.exe or doing a full deployment to a BizTalk instance itself – both of which aren’t particularly quick or agile. Furthermore, the library lets you seamlessly integrate with MSBuild, without jumping through lots of hoops to get a similar effect.

The library allows you to programatticaly create pipelines, create instances of components and assign them to their respective stages (including your own custom components and the familiar out-of-the-box components), or load an existing BizTalk pipeline without the need to deploy the supporting BizTalk project.

A very simple example from my recent testing looks something like the following:

If you want to test using Flat-Files, simply use a flat-file disassembler and specify the schema:

Powerful stuff – no more long-winded MSBuild tasks to deploy your solution, configure several possible adapters and push messages to those adapters over different protocols, simply to test a custom pipeline component on your development workstation (and lose 5-10 minutes in the process). Don’t get me wrong, all this should be happening in your smoke and UAT environments, but for the developer (attempting) to work in an agile manner on a BizTalk project, Tomas’ Pipeline Testing library is priceless.